Home>Chevron>The Republic of Chevron — 20 Years of Pollution, Labor Disputes and Harm to Local Communities in Kazakhstan 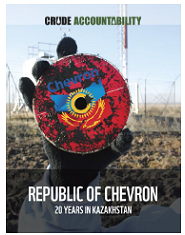 Crude Accountability announces the publication of its new report, “The Republic of Chevron—20 Years in Kazakhstan,” which chronicles Chevron’s impact on the environment and the rights of workers and local residents through its participation in the development of the Tengiz Oil Field and Karachaganak Oil and Gas Condensate Field in Kazakhstan.

Chevron is the biggest polluter in the Atyrau region of Kazakhstan, where it owns a 50 percent share in Tengizchevroil (TCO), the operator at Tengiz, which accounts for 70 percent of emissions in the region’s oil and gas sector.  In 2012, TCO’s airborne emissions were 64 thousand tons.[1]

TCO is among Kazakhstan’s highest payer of fines for polluting the environment. In 2010 the company paid around 5 billion tenge (over US $33 million).[2] The situation is similar at the Karachaganak Oil and Gas Condensate Field, where Chevron has a share in the consortium, Karachaganak Petroleum Operating, BV (KPO).  In 2012, KPO was fined over 12 billion tenge (over US $79 million) by the court for polluting the environment.[3]

Over the course of many years, the sudden death of workers of TCO and its contracting companies has been recorded and connected with the serious environmental situation on the field.  From 1993 to 2000, 64 TCO workers died at the Tengiz field.[4]  The statistics for death rates at TCO after 2000 are not public.[5]

Chevron’s operations at Tengiz have resulted in a series of labor conflicts and incidents with contracting companies, discrimination based on nationality, and illegal firing.  In 2006, a large-scale fight too place within “Senimdi Kurylys, one of TCO’s subcontractors.  Three hundred thirty nine Turkish citizens were injured in the incident; 136 of them suffered serious trauma.[6]

The breadth of Chevron’s corporate responsibility, by all appearances, goes no further than its interest in corporate profits.  The company actively participated in the relocation of the village of Sarykamys near Tengiz.  However, stating it was not the operator at KPO, Chevron refused to help with the relocation of the residents of the village of Berezovka, who live dangerously close to the Karachaganak Oil and Gas Condensate Field.[7]

“It is not by chance that Kazakhstan is considered to be the jewel in the crown of Chevron, as the country’s oil helps the company flourish.  However, for Chevron and other foreign investors, Kazakhstan has long been turned into a kind of field camp, where people come to pump out natural wealth and make money, leaving behind large-scale environmental pollution, poverty and lawlessness, said Sergey Solyanik, consultant to Crude Accountability.

What will be left behind at Tengiz after the departure of international investors in 2033 is the main question for the country’s leadership.  According to several evaluations, as a result of over-exploitation of the field, a significant portion of the unique field’s reserves have been lost.[8]  The situation is similar at Karachaganak, where in addition to intensive pollution of the environment, a new threat has recently appeared—sinkholes in the earth around the field.[9]

Chevron, one of the world’s largest oil companies and based in California, was one of the first major international companies to gain the opportunity to work in Kazakhstan after it signed an agreement in April 1993 on joint development of the Tengiz Field. Today Chevron is the leader in hydrocarbon extraction in Kazakhstan thanks to its investments at Tengiz and Karachagank, two of the most important oil and gas fields in the country.

For this and other results of 20 years of Chevron’s operations in the Republic of Kazakhstan, you can read the report at our website: www.crudeaccountability.org.