Home>Land of Fire in a World on Fire: Contextualizing Azerbaijan’s Oil and Gas Industry 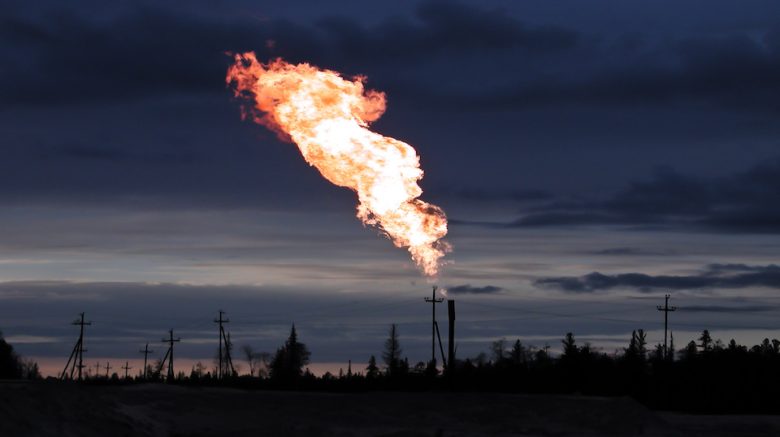 Azerbaijan, home to some of the world’s largest gas condensate fields and a hub for international energy routes, has participated in global institutional efforts to reduce its environmental impact. This article takes a look at Azerbaijan’s National Determined Contribution pledge under the Paris Agreement and its solicitation of climate adaptation funding to determine whether these commitments are genuine or perfunctory.

Azerbaijan has long been called ‘the land of fire’ because of the way its subterranean reserves of natural gas often ignite. While Azerbaijan’s early inhabitants believed the flames to be a symbol of the light of wisdom, the fires documented around the country’s oil and gas reserves have a more sinister connotation.

For its new report, Flames of Toxicity: Environmental and Social Impacts of Azerbaijan’s Oil and Gas Development, Crude Accountability partnered with Omanos Analytics to document the flaring and pollution taking place surrounding Azerbaijan’s oil and gas production sites through satellite imagery and interviews on the ground with local communities. The report also looks at Azerbaijan as a player in the global climate change arena.

In recent years, Azerbaijan has taken a few steps to reduce, or appear to reduce, its environmental impacts, and has solicited international funding to aid its climate change commitments.

With fossil fuels accounting for over 90% of its exports and between 33% to 50% of its GDP, Azerbaijan’s energy sector makes up the majority of its total emissions and is the biggest area in which the country can improve.

In 2016, Azerbaijan signed onto the Paris Agreement, agreeing to cut its greenhouse gas emissions by 35% by 2030. This translates into a reduction of about 25 Gigagrams of CO2. Azerbaijan committed to updating its energy sector with modern technologies that will create more efficiency and reduce waste in the oil and gas processing plants. This will help decrease emissions from gas leakages at production facilities and drilling sites.

While Azerbaijan’s updated strategy to reduce emissions (as of COP26 in 2021) includes a goal of increasing its use of renewable energy sources in generating electricity, it does not outline the large-scale changes targeting the oil and gas industries needed to make sustainable change in its economy. The focus is instead on promoting small changes related to its citizens’ use of renewable energy sources while continuing to use fossil fuels to drive its economy.

The overhaul of Azerbaijan’s high-emitting energy sector will not be an easy or cheap undertaking. The country’s pledges to transition to a greener economy on the global stage have helped it secure financial resources from the United Nations Framework Convention on Climate Change’s Green Climate Fund (GCF), which supports countries’ efforts to fulfill their commitments under the Paris Agreement. The fund’s resources are intended to help countries invest in low-emission technologies and implement sustainable development projects.

Azerbaijan has successfully solicited $1.1 million from the GCF for three projects:

The funding from GCF is mainly going toward vague capacity-building projects that are intended to help Azerbaijan on its green economy trajectory. However, these projects fail to address the root of Azerbaijan’s greenhouse gas emissions: its outdated fossil fuel energy sector.

As long as Azerbaijan continues to support the continuous extraction of its oil and gas reserves and allows large-scale greenhouse gas emissions while soliciting money meant for building climate resilience, it is clear that the country’s interest in combating climate change is a matter of convenience.

The lack of information surrounding Azerbaijan’s energy industry’s activities and the failure of the government and energy companies to uphold environmental and human rights standards make it unlikely that the GCF funding is solely being used for the promised climate projects.

While Azerbaijan’s contribution to greenhouse gas emissions is relatively small compared to larger countries, it is important for Azerbaijan to not only reduce its emission levels to protect the environment but also to grow its economy in diverse sectors as demand for fossil fuels declines and green energy alternatives are made increasingly available.

As Europe looks to Azerbaijan to provide gas and oil in the face of a potential pipeline disruption due to the developing Russian-Ukraine crisis, it is important not to lose sight of Azerbaijan’s lack of a demonstrable commitment to combating climate change and how damaging its energy sector is to its people and the environment.
Learn more about BP’s role in Azerbaijan, the likelihood of Azerbaijan meeting its Paris Agreement targets, how local people are affected by pollution, and more in our latest report, Flames of Toxicity: Environmental and Social Impacts of Azerbaijan’s Oil and Gas Development.