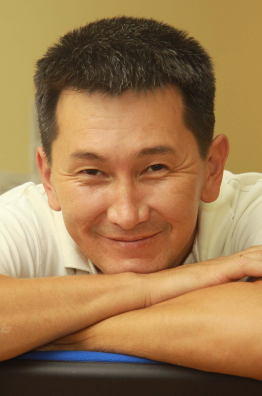 Astana, 20 April—IA Novosti Kazakhstan.  Unknown attackers fell upon Lukpan Akhmediarov, a correspondent for Uralsk Weekly, near his home and inflicted numerous wounds to his legs, said the editorial staff of the newspaper.

According to the newspaper, the incident occurred on Wednesday in the late evening.  According to neighbors who witnessed the attack, about five young men attacked the journalist. The first blow was from a heavy object to his neck and then he suffered eight penetrating stab wounds.  In addition, as the operating surgeons at the regional hospital reported, there was evidence of traumatic injury to his arms.

As the newspaper reported, he was operated on for almost three hours.  According to the doctor, there are penetrating wounds to the neck, pleural sternum, abdomen and thighs.  The patient is in serious condition.

Lukpan’s wife, Aigul, and the editor in chief of Uralsk Weekly, Tamanr Esliamova, giving testimony to the police, stated that they believe this was an attempt to kill him because of his professional and civic activism.

“A day earlier, Lukpan told us that his wife was being pressured by her bosses, on whom, according to him, pressure was being put by the DKNB (secret police).  Furthermore, he called the deputy of the department for public safety and the department of internal affairs, Manarbek Gabdulin and demanded that they leave his family alone,” said Esliamova.

Earlier, the International Fund for the Defense of Freedom of Speech, Adil Soz, reported that Uralsk city prosecutor, Batyr Dhazbaev approached the newspaper, Uralsk Weekly, with a demand to send him documents and disclose sources of information. Because of this, the newspaper became aware that the prosecutor had sanctioned spying on the journalist, Lukpan Akhmediarov.

Last week, Uralsk Weekly received a written document signed by the Chief of the General Prosecutor’s Office of Uralsk, Talgat Idrisov, “Possible Sources of Tension in the City.”  It lists labor collectives and organizations in the city, among whom are those who are ready to protest because of labor disputes.  The end of the message reads:

“Special caution should be taken with a group of destructive people (determined by Idrisov) among whom is the correspondent of Uralsk Weekly, Lukpan Akhmediarov, who is representative of the unregistered party, “Alga”, Abenova, A.; Shagumarov, A; Aisautov, M; and others, who have recently increased their activism significantly and in February of this year, organized eight “flash mobs,” within the city limits.  The actions of these people are constantly monitored by law enforcement agencies.  Two of them, (Akhmediarov, L, Abenova, A) have been given warnings by the prosecutor in accordance with Article 25-1 of the Law of the republic of Kazakhstan, “on prosecution”.”

This document became the basis for two articles in the newspaper, Uralsk Weekly and Respublika.After these articles, the City Prosecutor, Dzhazbaev, called the editor in chief of Uralsk Weekly and demanded that he be sent the original, which the article’s author had cited, and to name the person who had given the information to the journalist.

Original Article at : http://azh.kz/news/view/9861 (with photographs and video)