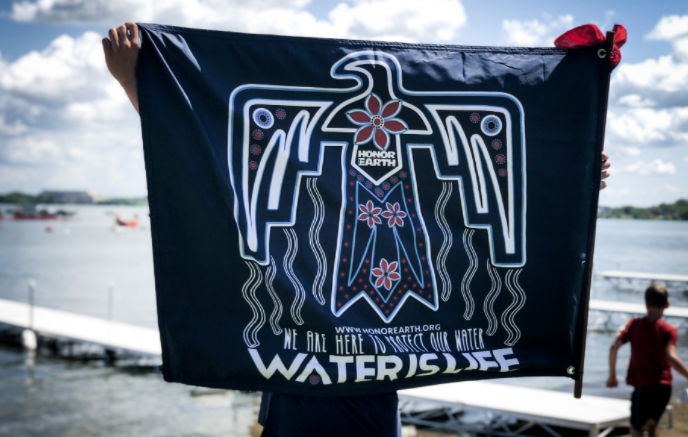 Leanne Grossman, Chair of Crude Accountability Board of Directors

Crude Accountability stands in solidarity with the Anishinaabe indigenous people in Minnesota, who are protecting their land and waters from a looming environmental and human rights disaster—the Line 3 tar sands pipeline.

For years, Enbridge Corporation, a Canadian energy transportation company, has been trying to expand its operations by building the new Line 3 pipeline to transport tar sands from Alberta, Canada to Superior, Wisconsin crossing the headwaters of the Mississippi River and Anishinaabe land in the Great Lakes Region.

However, in November 2020, the U.S. Army Corps of Engineers approved one of the last remaining permits for Enbridge Energy’s Line 3 crude oil pipeline across northern Minnesota. The Anishanaabe have been forced to put their bodies on the line where workers are bulldozing forests and readying the new pipe.

Anishinaabe people are now calling on all allies, niijiiwag (*friends), and those of strong hearts, to join them in protecting their sacred land and waters from the Enbridge corporation and the Canadian Tar Sands.

In addition to violating the indigenous people’s rights, the project brings a multitude of other threats and risks.

Tar Sands are one of the most environmentally damaging energy sources. Enbridge’s pipeline would produce toxic emissions on par with those of 50 coal plants and contribute to climate change and environmental degradation. We have witnessed this in the communities with whom we partner around the Caspian and Black Seas: dangerous health effects, floods, wildfires, and destruction of communities.

Enbridge is known for its oil spills, including one of the largest inland oil spills in the history of the country. The US Government recently settled a lawsuit against Enbridge for $177 million for oil spills and violations of the Clean Water Act.

Contrary to a popular belief about economic development and new jobs, pipeline projects only provide short-term construction jobs or those leading to high levels of pollution. Converting to green energy creates more profit and jobs and is safe, energy-efficient, and a much more sustainable way forward for communities and the country.

In addition to environmental threats, there is a proven connection between fossil fuel infrastructure projects like Line 3 and increased rates of sexual assaults, drug trafficking and violence around Native American reservations and other communities.

Please join us in supporting the Anishinaabe community (http://www.honorearth.org/welcome_water_protectors) and donating to Honor the Earth, the indigenous-led organization that is leading the fight against the Line 3 pipeline. https://donorbox.org/honor-the-earth-donation.