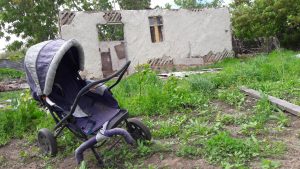 Zagipa Balieva, Commissioner for Children’s Rights in the Republic of Kazakhstan, requested that the country’s attorney general and minister of health find out why the child victims of the toxic poisoning in Berezovka have not been properly examined or treated for nearly two years.

As became known today, children’s ombudsman Zagipa Balieva sent inquiries to Kazakhstan Prosecutor General Asanov Zhakyp and Health and Social Development Minister Tamara Duysenova with a request to look into the inaction of the authorities in providing medical examinations and treatment for the children of the village of Berezovka, located in the West Kazakhstan region, which was affected by emissions from the Karachaganak oil and gas field due to an accident in November, 2014.

Balieva’s letters came as a response to the appeal sent in July by Rosa Akylbekova, director of the Kazakhstan International Bureau for Human Rights and Rule of Law (partner of the Children or Oil? coalition) and the working group coordinator of the NGO “For the Protection of Children’s Rights.” In her appeal, Akylbekova, a well-known human rights activist, lamented the inaction of state bodies of the country in the examination and treatment of Berezovka children. The mining companies that are members of the Karachaganak Petroleum Operating BV consortium (KPO), including Eni (Italy), Chevron (USA), BG Group (now part of Shell Netherlands), Lukoil (Russia) and KazMunaiGaz (Kazakhstan), also have not make efforts to ensure that medical examinations and treatments would be available to the children, says Akylbekova.

The appeal says that “children continue to suffer from serious symptoms and signs of toxic poisoning…However, parents of poisoned children still have not received any compensation for health damages, neither from KPO nor from the state, which refuse to take responsibility for the tragedy that occurred on November 28, 2014.”

According to Akylbekova, “the criminal proceedings investigating the poisoning of Berezovka residents were suspended, and Kazakhstan authorities have been waiting since last fall for the competent Russian authorities to offer help in conducting examinations. In the public hospitals of Kazakhstan, children were misdiagnosed with non-toxic poisoning, so they have not received appropriate treatment, without which many of them may become disabled.”

“We support the actions of the Commissioner for Children’s Rights, and our coalition partners, and we will closely monitor the situation, which is becoming more like an attempt to forget about the criminal case and poisoned children of Berezovka,” says Sergey Solyanik, Crude Accountability consultant, co-coordinator of the Children or Oil? coalition.