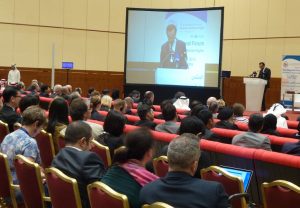 Today is the last day of the UN Forum on Business and Human Rights in Asia (April 19–20, 2016) held in Doha, Qatar.  The forum is attended by representatives of corporations, government agencies, and public organizations from Asia. The event has focused on the business impact on human rights and prospects for implementation of the Guiding Principles on Business and Human Rights in the region. The guiding principles were adopted by the United Nations in 2011.

At the opening ceremony, the head of the UN Working Group on Business and Human Rights, Dante Pesce, acknowledged that frequent violations and double standards are common problems in Asia. Due to the mass poisoning of children living in Berezovka from the Karachaganak field emissions in 2014, Kazakhstan has become one of the leading violators in Central Asia, along with Uzbekistan, where forced labor in the cotton industry remains widespread.

“The example of the tragedy of Berezovka shows that transnational business corporations violate human rights in Kazakhstan. We believe that foreign companies in any country should be guided by international standards of doing business. Our organization works to protect the rights of the village residents since 2003. We call on the consortium ‘Karachaganak Petroleum Operating BV’ (KPO) to accept responsibility for damage to the health of children and to ensure their medical evaluation and treatment from toxic poisoning,” said Sergei Solyanik, Crude Accountability consultant and co-coordinator of the “Children or Oil?” coalition at the forum.

On November 28, 2014, 25 children of the Berezovka village fainted, had seizures, and experienced dizziness, blood pressure surges, and severe headaches.  A year later, children were still getting sick, and while there have been new instances of toxic poisoning symptoms, there is as yet no cure for children suffering from this. For fourteen years, residents have sought relocation from the zone affected by the Karachaganak oil and gas field. Resettlement began only after the poisoning effect on children was seen in December 2015.

The Karachaganak Field is exploited by the KPO consortium whose members include the oil companies, Chevron, BG Group, Eni, Lukoil and KazMunaiGaz.