On April 30, 2010 an out-of-town session of the Astana City Specialized Inter-regional Economic Court was held in the village of Berezovka in connection with a lawsuit charging the government of Kazakhstan with failure to act to ensure the safety of the village residents. The lawsuit was filed by the Ecological Society “Green Salvation” on behalf of the village residents, who are seeking relocation from inside the Sanitary Protection Zone of the Karachaganak Oil and Gas Condensate Field. 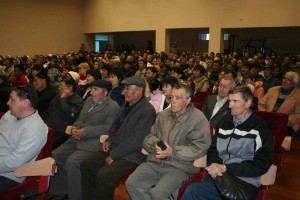 The judge, together with representatives of the government and local authorities, came to hear the Berezovka residents give their opinions about living near the dangerous facility and learned that the residents of the village would like to be relocated. In Kazakhstani legal history, and in the history of the lawsuit itself, to hold an out-of-town hearing is quite a unique occurrence. Over three hundred residents attended the court hearing, which was held in the local House of Culture.

The hearing did not last long. The judge heard presentations from four villagers. Svetlana Anosova, at whose request Green Salvation filed the lawsuit, stated, “I believe that I am speaking for the majority of the village residents when I say that living this close to a field as large as Karachaganak is dangerous to our health. We see changes in the plant world and in the health of our children. When emissions occur, people’s physical well-being deteriorates. There is a high mortality rate in the village. We filed this case because we believe that we need to be relocated.” Magzum Irmekbaev stated, “The animal world has practically been destroyed. Our water is polluted. People are sick. For example, in 2008, 42 children were operated on for appendicitis. For every ten men from the village who apply, only one is accepted into the army.”

Each speaker left the stage to applause from the locals, and there was no doubt—Berezovka’s residents do, indeed, want to be relocated.

The case will be continued in the Court in Astana.

Additional information about the legal process is available at: http://www.greensalvation.org/index.php?page=berezovka. For more information on the operation of the Karachaganak Field, please see our Karachaganak Campaign Pages.