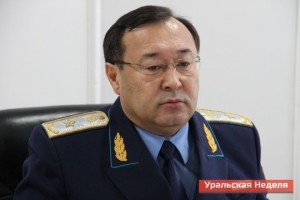 he eve of a mass poisoning of children in the village of Berezovka (Burlin district, Western Kazakhstan Region), emissions of hydrogen sulfide took place at the gas processing complex, GP-3, due to an accident at the gas re-injection compressor.  The Prosecutor of Western Kazakhstan Region, Serik Karamanov, reported this today in a statement to journalists.  KPO,B.V. managers had denied that fact earlier.

“It has been determined that at 2:19 PM on November 27 there was a gas condensate leak lasting two minutes at GP-3 through the stacks. There was a gas flare via the flare systems, which are located on a field 8.5 kilometers from the village of Berezovka.  According to explanations by KPO employees, due to an electricity failure, gas failed to re-inject into the reservoir.  As a result, the gas was under enormous pressure and escaped to the surface,” stated Serik Karamanov.

Furthermore, according to the Regional Prosecutor, one of the two stations for environmental monitoring in the village of Berezovka, which automatically track the level of hydrogen sulfide in the air, was turned off, allegedly for repairs.

Serik Karamanov also stated that at the present time the prosecutor’s office has determined that gas emissions into the atmosphere on the field occurred on November 17, 18, 25 and 27 in amounts higher than the maximum permissible concentrations for toxic substances.

“At the present time we have received the sanction of the General Prosecutor of the Republic of Kazakhstan and we are going at KPO with a full examination. The Department Committee for Technical Supervision, the Department for Consumer Protection, the Department of Environment, the [monitoring firm] Kazgidromet and specialists from the Zhangirkhan laboratory are working with us on the examination. Two assessments have been set within the bounds of a criminal case.  One has already been completed, and the materials were sent to Astana, and in the second, air, water and soil testing is underway right now.  I have to acknowledge that because of a lack of experience, we are too late on several analyses.  For example, we only just understood that, in addition to taking blood and urine samples, we should have taken samples of hair and skin and that we should have taken more than one sample of blood and urine.  We will correct that now, of course,” said Serik Karamanov.

The regional Prosecutor also stated that the supervisory bodies would make a legal assessment of the statement by KPO B.V.’s manager, Steve Wright, who told the residents of the village, in the presence of the regional akim, N. Nogaev, there had been no emissions on the field, the day after the mass poisoning of children.

“We could tell that he was nervous.  I cannot say that he lied, but if the link between the emissions and the mass malaise of the children is proven, then, obviously, we will raise the question about the responsibility of the KPO and its employees.  And it should be understood that in the event a link is established over the course of investigation, then all issues connected with KPO will be immediately escalated,” said Serik Karamanov.